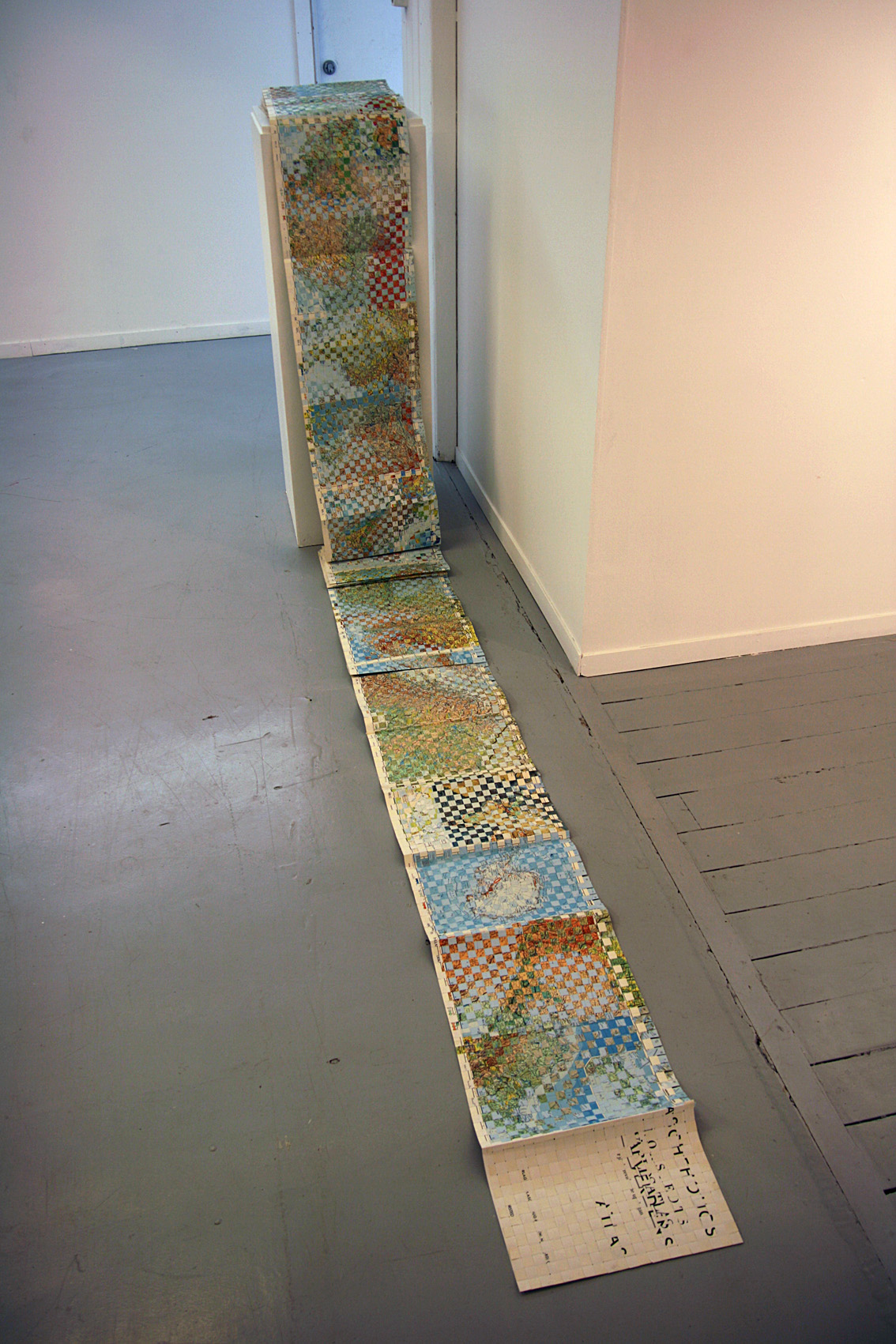 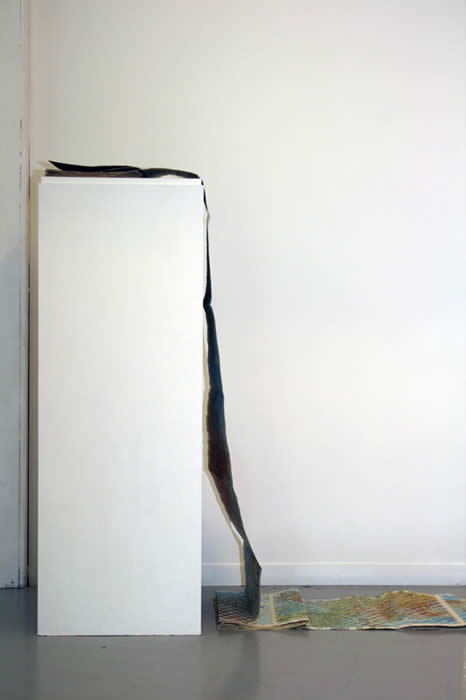 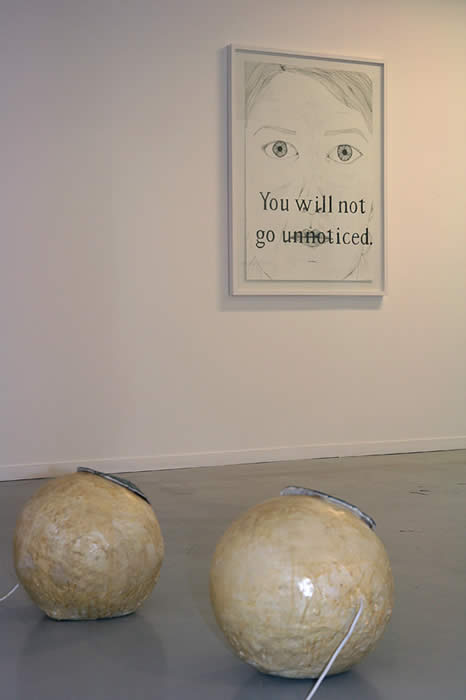 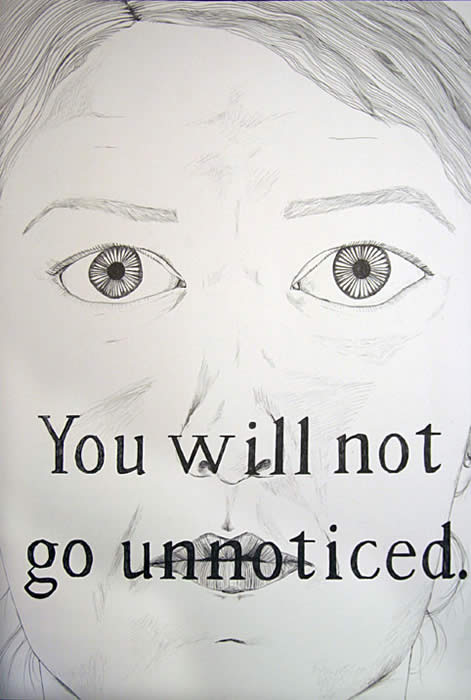 There is a fiction that nature is silent. There is another that it roars. Silent Fiction, an exhibition of drawings, paintings and installation sculpture by Lisa Stålspets plays with the idea that nature is not so much mute as muted by us, and if it has a voice, it is voiced by us.

Nature does have a roar, beside its creak and murmur and song, but this is its own sound, its own factuality that we rarely hear. Its `silence` is sound on another wavelength and what it might be saying, its narrative, is often beyond or outside of language. As we imagine ourselves to dominate nature it remains a mystery, a fiction to us.

Nature has been categorized as explicate, unfolding its meaning to us through our bold, sometimes loud apparatus of scientific explanation and demonstration - we give it language and the illusion that it is speaking to us. It is of our nature in the sense that it too has been designed and refined, Natura Naturata, explicable if we took time to examine it, rather than Natura Naturans - nature doing what nature does, wild and unyielding. One of the paintings in the exhibition, depicting a camera on a tripod in the woods with microphones for antennae, images this conceit that we are able to see into nature, that we might quite naturally be in its midst, planted advantageously in the light and clearing, the folding of nature ironed out for us.

Perhaps `nature` is too large a category for us. Landscape, by contrast, on a smaller scale, is implicate. In order to experience it rather than simply translate it into an arcadia before us, we must fold ourselves into it. The convolutions of language and visual imagery relating to nature - their absurdity, vanity and inadequacy despite their truism - are the material through which Stålspets undoes our Linnaean categories and romanticized images of nature, quietly implicating us in landscape’s scene. Unfortunately, like Narcissus, we rarely see beyond our own image in nature, never truly grasping it, and so another dimension to her work is our failure to apprehend nature and the absurdity of our attempts to fold ourselves into its setting.

How, then, might we structure our being-in-the-world of nature? How might we think ourselves into landscape? A first step might be to acknowledge the inadequacy of how it is imaged to us, to take apart its perfection and rethink it as a strange process of naturans - naturing. That this processual world must be approached with ongoing reflection is hinted at in Stålspets’ portrait written across with the command “Don’t interrupt! I’m thinking.” There are two pictures here, threaded together, quite literally interwoven, making the viewer oscillate between landscape and faciality. As our focus strains between the two we begin to see the implicate nature of this composite image. In another work, a woven atlas actually made out of two atlases, she has threaded together two cartographic representations of the same territory that are quite different narratives of that territory. Out of these contradictory geographies she has not only critiqued their inconsistency, found a crack in their epistemology, but also produced a more complex image.

In art we of course have the Cubists, among others, to thank for this kind of partial, complex imaging, but the notion of perceptually folding ourselves into the landscape is the territory of phenomenology. This philosophy and practice of overcoming the mind-world divide, in this case the problem of how we think ourselves in relation to nature, dissolves the distance between us and the landscape before us. Nor are we merely in, but separate from, the world. Maurice Merleau-Ponty, chief among the phenomenologists, preferred more intimate prepositions than merely `in` the world such as `within`, `alongside`, or `among`. For him perception is no longer about experiencing the world through the binary lens of subject-object, body-nature, mind-world, but rather through complex syntheses in which none of these categories make sense anymore and what we deal with are phenomena or appearances, including ourselves, in a perceptual field.

Silent Fiction treads the ground between our subjective sense-making in nature - inscribing and distorting it to our own ends - and the immersive non-subjective experience of phenomenology. In representational terms both of these ends are ultimately futile, something with which Stålspets’ picture of tangled undergrowth inscribed with “Don’t confuse desperation with being wild” intersects.

It can be quite comical, but also very human, that the attempts we make to become as one with nature - the acrobatics in the forest - produce only absurdity, although in a quite beautiful way and perhaps we shouldn‘t be embarrassed by our naturism. Nevertheless, the inscription “Settle for what you have” written over the image of a knotted, apparently ugly junction of branches is not a picture exhorting us to accept our own nature with its flaws and blemishes but rather points to the absurdity of even asking this question within unselfconscious nature.

A key term in phenomenology is `comportment` - how we cope, balance and orientate ourselves within the world. It involves a kind of alternating grace and grafting of oneself within the landscape, a machinic assemblage much more entangled than the camera in the forest. But usually we remain directionless; gymnasts spinning among the daisies, contorting or else wandering forlornly between the trees. However, for all this, these acrobats do fold into a `mute`, unseeing nature, an unjudgemental world, becoming, to some extent, part of its story.

Nature is another world. Stålspets’ painting of trunks of trees in a forest without people escapes what Merleau-Ponty calls the “antecedant pre-interpretation of data” - it doesn’t translate landscape into an image purely for our subsequent consumption: it remains a forest for itself. It might seem counter-intuitive to try and image this world but Merleau-Ponty himself cites Paul Cézanne’s paintings as an imaging of this `pre-world`.

We have a tendency to weave our narratives into nature’s, to scape, or shape the land, but ultimately we are frustrated. As I have suggested above, it is our folly that we believe we can see into nature. Here in the exhibition we have this idea dissected. Look to the earth and you will see two eyes, enlarged sculpted apparatus that each contain a landscape: In one eye one can make out sky and clouds, in the other a forest. But the eyes’ lenses are such that one cannot focus on the images in their entirety. As Merleau-Ponty might put it there is only `diffuse awareness`. Nature doesn’t easily translate. Here it is apparently encapsulated and objectified, pixelated on the retina, but the eye fails as a cipher. One might adopt a different tack, discerning the mind behind the eye, the mind’s eye, but even here we will not find a clear image of nature because, as phenomenology would have it, many parts of the world are not mind-like.

Silent Fiction doesn’t tell nature’s stories, these must remain untold: as the artist puts it they are “resting in the landscape.” Once again, like a magpie, one might steal some insight from phenomenology: nature is a `disobliging` world and its very structure, although explorable by humans, exceeds its discovery. Lisa Stålspets’ images draw on what art has in its own nature, the capacity to make strange rather than explain, a preference for illumination rather than enlightenment. Ultimately though, even as we announce our dominance of nature, we are quietly caught in its fictions.